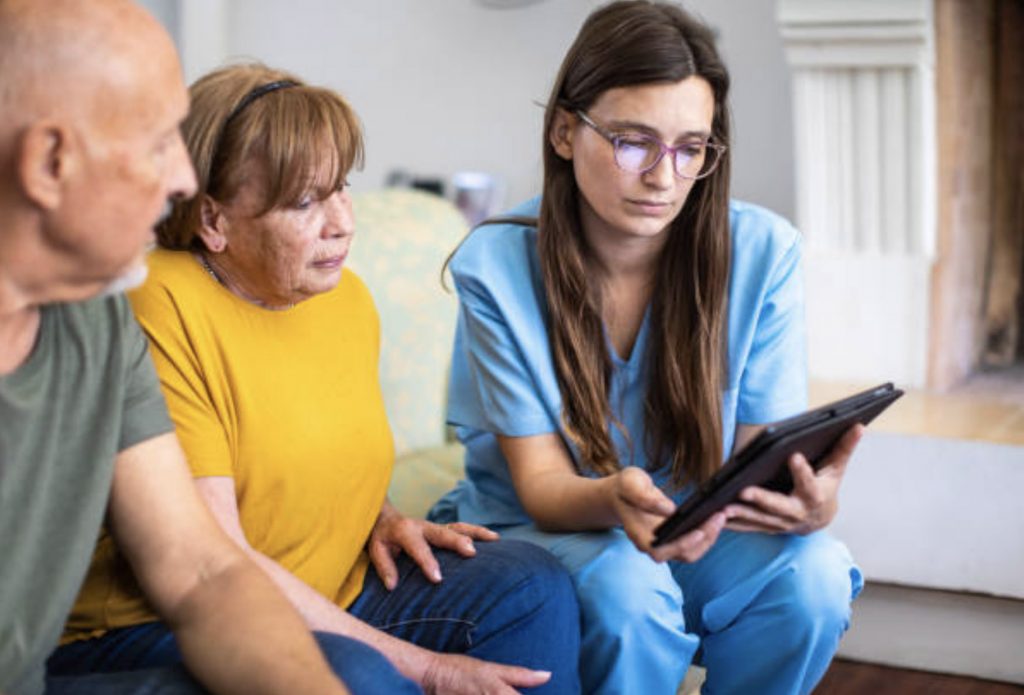 Q: Qualified Provider: Who is a Qualified Healthcare Provider?

Q: Qualified Provider: Who is a Qualified Healthcare Provider?

A: A qualified healthcare provider is defined as:

Q: Can PAs determine if the person qualifies?

Q: In addition to doctors, I understand physician assistants and nurse practitioners can also perform aid in dying.  Can they determine if the person qualifies or is that up to a doctor?

A: All of those qualified providers in the above answer can prescribe the medication. But every MAID patient must have a MD or DO

1) confirm the terminal illness (except: Individuals enrolled in hospice are considered terminal based on the standard of care and do not require a second confirmation if the prescribing provider is a physician);

3) assess their ability to self-administer aid-in-dying medication before a prescription can be written.

Q: Provider Support: What Can I Do to Make Sure My Provider Will Support Me?

Q: Provider Support: What Can I Do to Make Sure My Provider Will Support Me if I Ever Want to Access Medical Aid in Dying?

A: Ask your healthcare providers now whether they will support your end-of-life options, including medical aid in dying. This will encourage your providers to listen to your priorities and become prepared to provide you with the treatment you may want in the future. If your providers are unable or unwilling to support your end-of-life choices, you have the option to change your care to a healthcare team that puts your wishes first.

Q: Provider Training: My Healthcare Providers Want to Better Understand Medical Aid in Dying; Where Can They Learn More?

Finally, they may call Compassion & Choices’ Doc2Doc consultation line at 800.247.7421 for a free, confidential consultation and information on end-of-life care with our medical directors who have extensive medical aid-in-dying experience.

Q: Can a Alzheimer/Dementia patient access medical aid in dying?

Q: Can a person with an Alzheimer/Dementia diagnosis access medical aid in dying?

A: With regard to whether an Alzheimer or dementia patient is eligible for medical aid in dying, one of the qualifications of the law is that the prescribing health care provider must determine that the individual has capacity and can make and communicate informed health care decisions. This determination is made by the individual’s NM licensed prescribing health care provider and according to professional standards of care and provisions of Section 24-7A-11 NMSA 1978.  If an individual is deemed to not have capacity, there are other end of life options to consider such as palliative care, hospice, not starting or stopping treatment, VSED (voluntary stopping eating and drinking) and palliative sedation to name a few.

Click to read about these and other end of life options.

Or to gain a better understanding of how to help an individual prepare and plan for the end of life upon receiving a diagnosis of Alzheimer or Dementia, please click here.

A:  No. A mental health referral is only necessary if the prescriber or consulting provider has a question or concern about the individual’s capacity. The Act states that a healthcare provider must determine that the person is terminally ill, can self-administer the medication, and is mentally capable of making an informed decision. If there is any doubt about capacity, the provider must refer the patient for an evaluation to a licensed mental health professional (see FAQ for who is capable of making a mental health assessment).  Furthermore, “determination of capacity shall be made only according to professional standards of care and the provisions of The NM Uniform Health-Care Decisions Act  (Section 24-7A-11 NMSA 1978)” which presumes an individual has capacity to make their own healthcare decisions.

Q: Who is capable of completing the mental health assessment?

Q: Mental Health Assessment: Who is capable of completing the mental health assessment? (does it have to be a psychiatrist or can it be a mental health provider who is independently licensed?)

Q: Do prescribers need to assess a patient in person?

Q:  Do prescribers need to see and assess a patient in person? Or does tele-health work?

A:   Telehealth can be utilized in accordance with accepted medical standards of care. The NM MAID law has no requirement that the prescriber must see the patient in person, although it is recommended if at all possible. The decision is left to the discretion of the provider.

As long as the patient is enrolled in a Medicare certified hospice program and the prescribing physician makes the various findings required by statute, and that provider has also “provided medical care to the patient in accordance with accepted medical standards of care,” there is no requirement that the prescriber do a physical exam of the patient or see the patient in person. If the patient is not enrolled in hospice, at least one of the two physicians must “conduct an appropriate examination,” but even then it does not have to be in person, that decision is left to the discretion of the provider.

Q: What Cause of Death Should be Listed on the Death Certificate?

Q: What Cause of Death Should be Listed on the Death Certificates of Individuals Who Have Accessed Medical Aid in Dying?

A: The law specifies that a death resulting from self-administering aid-in-dying medication is not suicide. The underlying illness should be listed as the cause of death.

Q: How is an un-attended death reported?

Q: If a patient is not on hospice and a medical provider does not attend the death, how is the death reported?

A: In these cases where the prescribing clinician is not present at the death and a healthcare provider (physician, nurse practitioner, hospice doc, hospice nurse, etc.) is not present to pronounce the time of death, the family/friends/surrogate of the person utilizing MAID should

The individual MAID patient can arrange for this themselves prior to death.

In these cases specifically, it is strongly recommended that the individual requesting MAID, or their family/friends/surrogate retain a signed copy of the Request to End My Life Peacefully Form in their home and make it available to substantiate the death.  It is likely that the NM Office of the Medical Investigator will investigate the death if it is unattended and having this completed form which includes the signature of witnesses and the optional attestation of the prescribing clinician can be used to validate that the individual utilized medical aid in dying.

Q: What if the individual utilizing MAID is on hospice?

Q: What If The MAID Death Is Unattended But The Individual Utilizing MAID Is On Hospice?

A: Families should call hospice and the mortuary to notify them of the death.  Hospice will pronounce their patient’s death and provide appropriate medical certification of cause of death to the funeral service practitioner at the mortuary.  Hospice will also offer a nursing visit for support after a loved one dies. Finally, hospice offer ongoing bereavement support of many types, free of charge.

Q: Where do healthcare providers pick up the end-of-life medications?

Q: Where do healthcare providers pick up the end-of-life medications – how does that process work?

A: The prescription must be sent directly to a compounding pharmacist by the qualified clinician, not by the patient, family or friend.  The pharmacy may need time to order the medication.

If the terminally ill person decides to pick up the medication themselves, they will need to designate a person responsible for its safe disposal, if they end up not taking it.

Q: What is the cost of the Aid in Dying Medication?

What is the cost of the Aid in Dying Medication?

A: In most cases, the patient will be responsible for the cost of the medication, which are likely to cost around $700.

Q: How does the New Mexico law differ from other states?

Q: How does the New Mexico law differ from other states who have passed medical aid in dying?

A: Nine states (OR, WA, MT, VT, CA, CO, HI, NJ, ME) and the District of Columbia have authorized medical aid in dying. Since the first Oregon law was passed by ballot initiative in 1994 and actually went into effect in the fall of 1997, we’ve learned a lot. Oregon’s experience and that of the other authorized states, now constitutes more than 40 years of combined experience covering more than 22% of the U.S. population.  In writing the 2021 Elizabeth Whitefield End-of-Life Options Act, bill drafters applied those lessons learned to the bill’s provisions.

Shorter waiting period – Other states that have authorized medical aid in dying have extended waiting periods that can require multiple visits to providers and generally takes at least 2-3 weeks or more to become qualified for the medications. This has created barriers for people who urgently need to access the law. Several states have or are looking to amend their law with emergency exceptions or to reduce these wait times. Our law reduces that barrier from the start. The Elizabeth Whitefield End of Life Options Act has only a 48-hour waiting period before the aid in dying prescription can be filled for qualified individuals, and even that wait period can be waived if deemed urgent.

Because 32 of New Mexico’s 33 counties are designated “primary care health professional shortage areas” this is an important provision for expanding access to the state’s population, especially for those living in rural areas where a choice in healthcare providers may not be an option.

Hospice Eligibility – Under the New Mexico law, an eligible individual needs two health care providers to confirm a terminal prognosis of six months or less to live as a requirement for qualification. However,the Act does not require confirmation from a (second) consulting clinician if the prescribing clinician affirms that the individual is enrolled in a Medicare certified hospice program. Hospice enrollment requires a terminal prognosis of 6 months or less to live.  Since approximately 90% or more of those who utilize these laws in other states are in hospice at the time they request medical aid in dying, we think this change will really help reduce some barriers.

Minimizing paperwork – The NM Act has minimized the required paperwork for all parties. There are some basic reporting requirements included but not the onerous provisions included in some other state’s laws.

Q: How did the Senate amendments affect the End-of-Life Options Act?

A: The Elizabeth Whitefield End-of-Life Options Act was amended a few times during the legislative session. None of the Senate floor amendments actually changed the way that the law will work.

In the end, the amendments added on the Senate floor made the law simpler, shorter and stronger.