Across the world, discussions around death and how we die are becoming more commonplace and the options that are available at the end of life are also increasing. One option that is becoming more available in the United States is medical aid in dying.

Medical aid in dying allows a mentally competent adult with a terminal illness and prognosis of six months or less to live, to request a prescription from a qualified healthcare provider for life-ending medication. The patient can choose whether to use the medication to end his or her life.

There are now eleven (11) jurisdictions that have authorized the use of medical aid in dying, including: Oregon, Washington, Montana, Vermont, California, Colorado, Washington D.C., Hawai’i, New Jersey, Maine, and now, New Mexico. 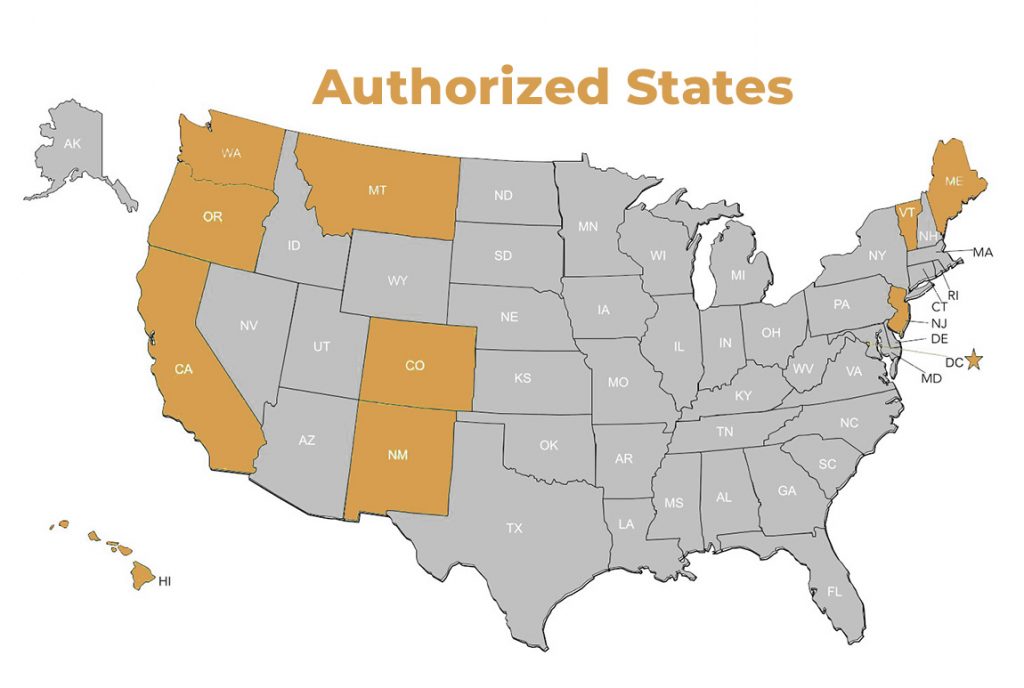 With almost 25 years of evidence from Oregon alone and another 20 years of combined evidence in the other authorized jurisdictions, this option is now a trusted and time-tested medical practice. The fundamental core safeguards embedded in medical aid-in-dying laws ensure that all terminally ill individuals pursuing the option are protected from coercion and abuse. In all the combined years of experience, not a single case of abuse or coercion nor any criminal or disciplinary charges have been filed. Not one.

The laws that authorize this compassionate option have proven not only to protect patients, but to improve care across the end-of-life spectrum. Medical aid in dying protects patients, affords dying people autonomy and compassion during the most difficult time, improves end-of-life care, and costs states almost nothing to implement, except for the minimal costs associated with collecting data and producing the annual statistical reports.

Despite the stellar track record, passing medical aid in dying legislation is a heavy lift. It takes years of community outreach and education, strong, well-informed and determined legislative sponsors, and a determined group of advocates and community supporters to see the legislation through to passage.

Since the first Oregon law was passed by ballot initiative in 1994 and actually went into effect in the fall of 1997, we’ve learned a lot.  Both from Oregon and the experiences of the other authorized states, which now constitute more than 40 years of combined experience. With the authorization of medical aid in dying in New Mexico, more than 22% of the U.S. population now have access to this compassionate option. 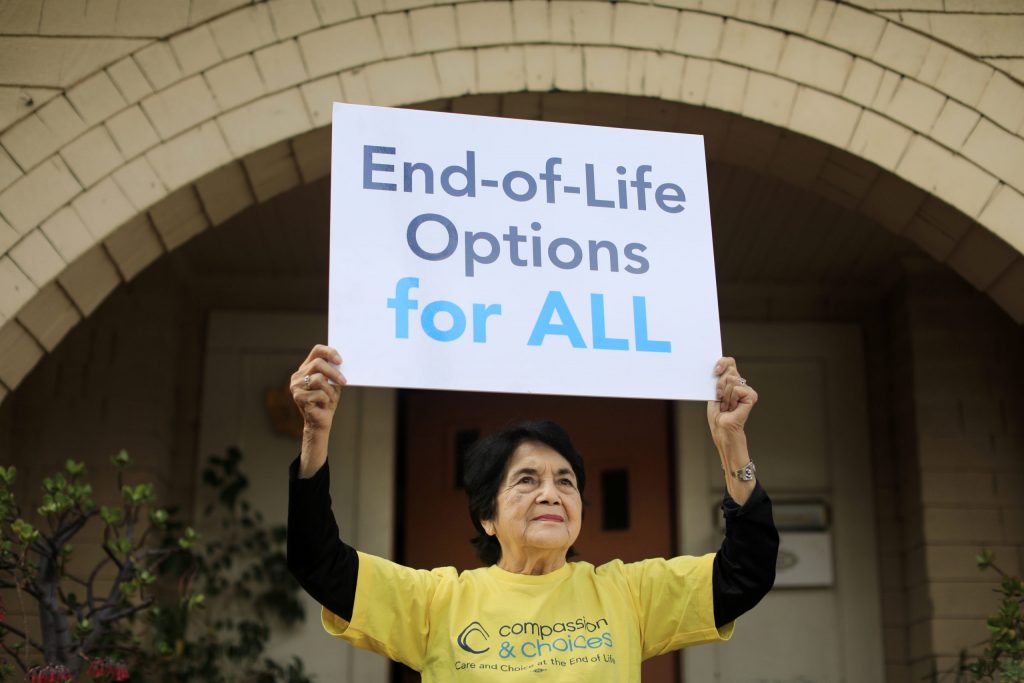 In New Mexico, passing the Elizabeth Whitefield End-of-Life Options Act in the spring of 2021 was a long time in the making and came only after years of advocacy.

Morris v. New Mexico was a 2012 lawsuit that challenged the states stance on aid in dying.

A court reviewing the matter ruled that terminally ill, mentally competent patients have a fundamental right to medical aid in dying under the New Mexico State Constitution which made medical aid in dying legal for a short time.  However, this ruling specifically protected physicians from prosecution only in Albuquerque’s Bernalillo County, not throughout the state.

At the time, Supreme Court Justice Charles Daniels joined in the unanimous ruling against the end of life option. Yet he personally believed that every terminally-ill person should have the right to decide when to die.

During the last week of his life with ALS, he was suffering, gasping for breath, and ready to be gone. His doctors were not allowed to help him.

His wife, Randi McGinn, testified in 2021 “It is time for the New Mexico Legislature to pass HB 47, the Elizabeth Whitefield End-of-Life Options Act, so no other good men and women have to suffer in the same way. Since the mortality rate for human beings is 100%, it is an option that every one of us should have at the end of our lives.”

A group of dedicated advocates formed the New Mexico End-of-Life Options Coalition, which later became the nonprofit organization – End of Life Options New Mexico. Together with our national partners Compassion & Choices and Death With Dignity, we launched a multifaceted campaign.  Our work included organizing testimonies at legislative hearings, conducting paid, earned and social media; and inspiring strong and robust grassroots efforts. Volunteer advocates shared their stories and support through emails, phone calls, lobby days, social media, videos, testimony and a collection of stories in our storybook.

Representatives Deborah Armstrong and Bill McCamley carried HB 171 and Senator Liz Stefanics carried SB 252, respectively. Despite the monumental efforts of nearly 6,000 supporters and citizen advocates from across the state, the 2017 New Mexico End of Life Options Act was narrowly defeated on the Senate floor by a 22-20 vote.

Over the next few years, the New Mexico End of Life Options Coalition, Compassion & Choices and the Compassion & Choices Action Network were unstoppable, passing three municipal resolutions in support of medical aid in dying, securing endorsements from a myriad of local organizations, conducting an Ask the Candidate program, presenting to medical groups and the public, identifying storytellers to put a human face on the issue and so much more.  In addition, New Mexico’s rural outreach team presented to bilingual members of the Community Health Worker Association and offered continuing education units in rural communities.

While the public campaign was front and center, behind the scenes the bill sponsors and local legal experts were carefully drafting a bill that recognized that a more appropriate balance between safeguards and access was needed. This bill included key provisions, such as:

When this bill was introduced in January of 2019 it represented a turning point in the movement; it was the first time that state lawmakers were willing to acknowledge that the problem with the Oregon model legislation was not that there were not enough safeguards, but rather that there were too many unnecessary barriers.

In this legislative session, bill sponsors and supporters decided to name the legislation after a fierce advocate, Judge Elizabeth Whitefield in honor of her advocacy and hard fought battle against cancer. Unfortunately, Judge Whitefield passed away in 2018 before the passage of the law and without access to medical aid in dying.  The 2019 session ended without sufficient time to pass the bill.

The Power of Storytelling

With years of public education, grassroots organizing and lobbying behind us, we came into the 2021 session in a strong position, knowing that this very well could be the year terminally ill residents of New Mexico’s voice was finally heard. However, the 2021 legislative session looked quite different; lawmakers were focused on the COVID-19 pandemic and all hearings were conducted virtually to minimize risk of the virus.We quickly adapted our approach to account for the new reality and took our campaign virtual, using the power of our storytellers (see New Mexico Storybook) to put a human face on the issue.  We held weekly organizing meetings on Zoom; had a virtual Lobby Day, flooded legislators inboxes and telephone lines with thousands of emails and calls. News outlets received press releases and story after story that demonstrated the importance of passing medical aid in dying legislation.

One of the most difficult challenges was that with the virtual hearings, testifiers were only allowed 1-2 minutes time to deliver their messages. This required the careful selection of the right mix of testifiers and incredible restraint on behalf of the testifiers to stick to a very narrow time limit.

These public, visible efforts to change hearts and minds worked in partnership with behind-the-scenes efforts to garner the needed votes to get the bill heard and passed out of four committees, voted through two floor votes and ultimately to the governor’s desk.

Without question, a key to the success was the amazing bill sponsors, Representative Deborah A. Armstrong (D-Albuquerque) and Senator Elizabeth “Liz” Stefanics (D-Bernalillo), who gave their heart and soul to this effort; the local leaders who served as expert witnesses and brought credibility to the efforts; and the powerful storytellers who put a human face on this issue. The New Mexico End-of-Life Options Coalition recruited and rallied volunteers, organizations and partners to secure endorsements from local organizations and resolutions within several municipalities; spoke at local events, health fairs and town halls; and brought this important issue to individuals and communities across the state.

This law is a momentous achievement for New Mexicans. It also represents a new chapter for the end-of-life movement. For the first time since the Oregon law was passed in 1994, lawmakers debated the merits of the law, questioning whether it could be improved to ensure more people could access it.

New Mexico’s medical aid in dying law sets a new, more accessible standard for other states across the nation to follow. 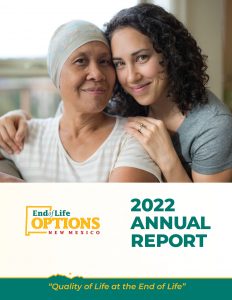 Learn about Vision, Mission, and Values